Many people have asked me about our name: Fat Tabby and Friends and the cute cat face on our logo. Well, that would be Buster. Buster is our inspiration, our logo, and our Fat Tabby. (To be fair, he’s not my first Fat Tabby. That would be – yep – Tabitha. Tabitha was 17 when she crossed the bridge in March of 2013.) 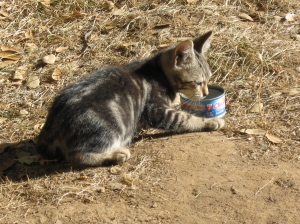 Baby Buster Before Capture and yes – he was fat then too.

Buster came to us courtesy of an elderly man who fed all the ferals but passed away in July of 2009. Buster and seven of his siblings ended up in my yard . . . oh no! Kittens! I can’t resist kittens! I trapped all but Buster at first. Buster was a real pistol – we trapped him twice and he escaped twice. He then would come to the back door and try to play with my cats through the glass – he was that lonely. It broke my heart. Then in early October that year it rained. Poured. Buster was outside in the rain soaked through and through. He was only a baby at about three months old and I was very concerned he’d get ill. We finally succeeded shortly thereafter in trapping him only to have him be terrified and continually hiss at us. But our Buster is nothing but sweet: he never bit or scratched; just the hissing. I wasn’t sure I could tame him but time and love (and neutering a couple months later) did the trick. Buster is pure undiluted sweetness but still a bit on the timid side. Coughing up his own hairballs frightens him so much he has passed out and gives himself diarrhea! (See the Pee B Gone post below.)

Over the pass in Bridgeport there was a store called Buster’s. We used to joke that our Buster was an entrepreneur and sold “Chicken! Cuz I likes Chicken!” When Buster’s closed (a sad day for me because I grew up camping on the Eastern side of the Sierras and we knew Buster’s really well) we would comment, “Buster sold out of chicken!” Since he was already an experienced business owner he was the logical choice for a mascot. He continues to be my inspiration, my dinner companion, my drools-like-a-fire-hydrant-when-pet-and-you-have-to-wash-what-you-are-wearing little buddy. Happy five year anniversary of your adoption Buster Buddy!

As you can see not much has changed in five years

Get to Know Us

Jan is a reliable and caring pet sitter, and we’re very grateful for her service. She is always very accommodating to our needs, and texts us to reassure that all is well. Fat Tabby gives us peace of mind that our pups are fed, peed, and comfortable while we’re out. Farley and Maya give ‘Auntie Jan’ two enthusiastic paws up!